This is the blog tour for JOCK 3, Back Off! That's My Jock 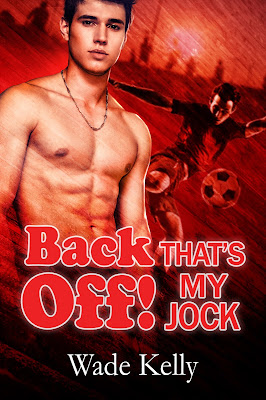 Here are the rules for prizes:


…  I, Wade Kelly, will be giving away one GRAND PRIZE (items listed below) and three runners up prizes of a $10 gift card for Amazon. All you need to do is leave a comment. ALL comments are logged for a chance at the prizes. BUT, ONLY those who leave a comment on 10 out of 12 BLOG STOPS will be entered into the Grand Prize drawing. Last time I think there were 15 people in the Grand Prize drawing.

Note: If we’ve never chatted and you aren’t on Facebook, it is a good idea to leave an e-mail address because I need to know how to reach you. If I can’t, and I reply to your comment on the blog post that you’ve won but don’t hear from you, I have to give the prize to the next person on my list. Each comment gets you a chance in the drawing. If you leave one on each, that is eleven entries PLUS you are listed in the Grand Prize drawing. For a reminder if the rules, and where I’m stopping next, visit THIS BLOG POST! I will update the links as each post happens.

Grand Prize includes all of the following:
1)   One of my famous spoons in the colors of your choice (If you already have one, I'll send something else.)
2)   One signed paperback from my back list (Not counting JOCK 3)
3)   An e-book copy of JOCK 4, when it comes out. (Not under contract yet)
4)   An AUDIOBOOK of your choice. (Promo code)
5)   And last, but not least, a soccer jersey for the player of your choice from the players in JOCK 3. AWAY OR HOME Jersey. (I’ll list them on my website along with pictures of the jerseys. They come in adult S, M, L, XL, 2XL, 3XL, & 4XL)

So there you go. If you have any questions, please let me know. Comment here or email me: writerwadekelly@gmail.com

Hello, lovely people. I have picked the winners.
The runners-up for a $10 gift card from Amazon are:
Kristian E.
Sheila S
Ineztey G.
There were 11 contestants in the final grand prize drawing.
The winner is... drum roll....
Jen CW

I appreciate all of you following the tour around to 12 stops! WOW. Such dedication. I hope you will come back the next time I have a book tour. I'm still writing JOCK 4, but I hope that one will be out next year. We'll see. I need to finish writing it first. Thank you for your support!
(Edit: 9/5/16 10:50 am EST)

Well, for anyone who knows me or has followed my blog for a while, you already know I'm inconsistent even if I WANT to be consistent. I guess what it comes down to is laziness and the lack of things to say. Maybe once I have more consistent publications, I'll have more to talk about. IDK.

News... JOCK 3 comes out August 26, 2016. I have a cover reveal set up on Caraway Carter's blog HERE. As well as a blog tour to talk about the book and me as an author. I hope you can join me. I'll be on the following blogs:

Not in that order.

I'll have actual links in ONE blog post later on, which I'll update with each blog post on the tour so I can list all of them in one place for your convenience.

Currently, I'm writing JOCK 4. The title may change so we'll just call it JOCK 4, or J4. I've been having difficulty writing this for several reasons. I have some personal issues with my son, which have affected me deeply. Since I'm a highly emotional person, this past year has been difficult on me. I also see this as a book which NEEDS to be amazing. It is the last of a 4 book series and I don't want to let people down. It needs to rock and therefore I think I've been putting too much pressure on myself. I probably just need to write it and see if my beta readers think it's okay. Going is slow, but I'm sure I'll get there.

Defining his sexuality didn’t make sense until his best friend spelled it out.

Doug Archer did some pretty idiotic things in the first eight weeks of his junior year of college. First, he kissed his gay best friend, and second, he kissed a guy he’d mistaken for a girl. Not stellar moments for Doug. If he isn’t careful, he’ll lose his spot on the soccer team to the new freshman, or worse, he might misconstrue his new friend Rob’s overly affectionate tendencies for flirting. But if Doug isn’t bothered by another guy’s attention, and he normally dates girls, does that mean he’s gay or bisexual?

Sam Garber suppressed his same-sex attraction his entire life. His father told him it was immoral, and Sam did everything he could to bury his feelings. However, after meeting Doug at a party and kissing him, Sam can’t think of anything else. He decides dating girls is the best way to keep his secret hidden. With playoffs in sight, this is no time to think about guys in any other context than soccer. Only, neither boy anticipates the difficulty in suppressing his attraction for another jock!

Let me know what you think. I'll have prizes on my blog tour so please consider following it :D

That's all for now.