Hello lovely readers! I am here with Amy Wasp from the GRL Dirty Dozen. What IS the Dirty Dozen, you ask?

TM Smith came up with the idea of 12 authors asking each other questions and hosting each other on our blogs to help spread the word through our readership. Is it working? Only you can answer that. So, for now, sit back and enjoy about Amy's book City Boy and what she had to say when she answered her questions. 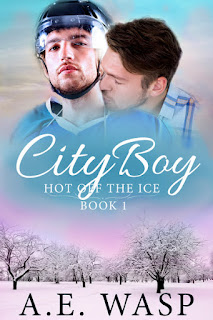 When a blown tire leads directly to mind-blowing sex with a white knight named Dakota, pro-hockey player Bryce Lowery discovers he is most definitely gay.

Being with Dakota opens up a whole new world. Bryce can't imagine life without him. But he refuses to be Bryce's dirty little secret. If he wants to keep Dakota, he's either going to have to come out publicly or retire and walk away from millions of dollars.

Bryce Lowery feels like the answer to all of Dakota's prayers. But is Dakota willing to leave the only life he's ever known only to be thrust into the spotlight as the boyfriend of the first out gay hockey player? Would their relationship even survive it?

He'll lose Bryce if he doesn't because Bryce will leave eventually. No one would turn down millions of dollars for a nobody with nothing.

City Boy is a first time gay, fish out of water, May/December love story with a happy ending. It features snarky siblings, a dirty-talking farmer, lots of food, and big choices. (No poultry was harmed in the making of this book.)

Now on to the questions we asked each other....

Amy Wasp - What is your favorite trope to write and why?

I love writing friends to lovers. The characters have a history together, they already have inside jokes and friends in common, and it makes for a very rich background. It also helps me with the dialogue, and items/locations can have pre-existing meaning for both characters and their friends.

Second chances have a lot of similarities. But for me, as the author, I have a hard time coming up with a good reason they broke up that is also something they can overcome in the present.

Pretend husband/boyfriend is another favorite because it lends itself to a lot of shenanigans and physical humor; two of my favorite things.

Jeff Adams - what’s your favorite part of the writing process and why?

I like the second or third draft through a manuscript. I can take all those clunky lines and make them better. I can discard subplots or themes that went nowhere. I can seed in things to support the revelations I came to about the characters in the final chapters. It’s when the story starts to not suck in my mind.

TM Smith – What inspires you to write?

Bills. JI don’t know. I’ve always written. I love learning about people’s stories and my mind just takes off. Now that I have bunch of books out, I am inspired by the lovely things people say to me about how my books make them happy. That’s my main goal, to give people a few hours of happiness.

AE Via- What career would you have if you never would've published your first book?

I didn’t publish my first book until I was fifty, so I can honestly say…none. I suck at real jobs. The longest time I held one for was three years and that was because it was a government job that I couldn’t quite without serious financial consequences until the time was up. I just kind of make up life as I go along. Ask me about my student loans! (No, please, don’t)

Lynn Michaels - How do you balance being original and giving the readers what they expect/want?

I don’t have a problem with that. I, too, love the same but different in my entertainment! Each story is unique because every character is unique. Every first kiss, every last first kiss, is special. If I took the pairs of characters from each of my books, and put them in the exact same trope-world, each book would be different.

Now I kind of want to do an anthology like that. Any takers?

JR Barten  - What have you done as a writer that you are most proud of?

Paid for my one kid’s tuition. Writing-wise, my ability to learn and grow with each book. I try to make each one better than the previous one or at least add something I felt was missing from previous ones, concentrate more on an element of story-telling that I short-changed.

Morningstar Ashley - What genre and trope would you like you write that you haven't yet?

Epic fantasy/fated destiny kind of trope. I started one and have two books in the series, but they didn’t sell well, so I never finished the trilogy. I will in 2019 even if no one reads it because I love it!

Alexa Land - What are you working on now, and when can your readers expect it?

I’m working on two things: Book 2 in the Pros & Cons series, Pros & Cons of Lying, staring Danny and Wesley from books one, and a follow up to Score, which will be the start of a companion series to the Hot Off the Ice book, featuring the Tornadoes, the Thunders’ minor league development team. I started it in a free short that’s available when you sign up to my mailing list called “Twenty Bucks.”

Deanna Wadsworth - How do you come up with your character's names?

It’s so hard. I had to come up with an entire roster for two fictional hockey teams. And nicknames for them.

Names are very important to me. A person’s given name and what they like to be called, what different people in their lives call them, can reveal a lot about the character and their relationship with different people.

I usually spend a lot of time on names. For main characters, I have to know their background first – place of birth, ethnic, economic, age-to have a place to start.  I try not to default to generic white American names unless that is part of the character. You can see I have a fondness for Russian names (which is lucky because there are a lot of Russian hockey players) because of all the variations of their names and the way they signal the level of intimacy between two people.

K-Lee Klein - Do you usually have only one project on the go or do you multitask between stories?

I try to only be writing-writing (which I what I call writing actual sentences) one thing at a time. I have folders/bookmarks/files for all my works in progress or potential future ideas, and as bits of dialogue or plot thoughts come to me, I’ll write them down. I seldom start from a totally blank page with no idea of what I’m going to write.

I have a million ideas, titles, character names, and setups in many different folders!

Jessie Gin - What do you think makes a good story?

Being emotionally invested in the characters. If I’m not, no amount of exciting plot or beautiful prose can make me finish. I have to care what happens to the person/people I’m reading about.

Wade Kelly -What is your suggestion or piece of advice to new and upcoming authors?

Write a lot. Have realistic expectations, and don’t underestimate the intelligence of your audience. If a book you think is ‘bad’ is doing really well, don’t waste time with saying ‘I don’t understand, how can people like this, etc, etc. It’s poorly written, simplistic…’ take a long hard look and tear that book apart to try and find out what is making people respond so strongly to that book.

Reading isn’t an academic exercise, it’s emotional, we as readers want something  that grips us for whatever reason and doesn’t let us go. Try to find what that is.

And a short trick for romance writers: Make sure you have at least one scene in each book that will make readers sigh and say “Why doesn’t that ever happen to me?”  If you can’t imagine a reader telling their best friend, “Oh my god. I loved the scene where x happened, or where Y did this,” try harder. Make those scenes happen. 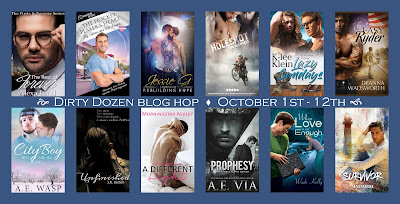 Amy (A. E.) Wasp is the author of the hockey romance seriesHot Off the Icefeaturing the fictional NHL team, the Seattle Thunder and the intertwined lives of the players, staff, and the people they love. The recently-launched Boy Next Door is the most current addition to the series.

Score, a part of the Hidden Creek family of books, introduced the Tornadoes, the Thunder’s minor league development team. Their story will continue in the Chasing the Stormseries, premiering in 2019.

HerVeteran Affairs series focuses on the issues veterans of all ages and backgrounds face when the return to civilian life. All the stories take place in a small town in Northern Colorado that is remarkably similar to the one in which she lives. Readers can expect a new Veterans Affairs book in the first half of 2019.

Pros & Cons, her newest series, a Leverage/Charlie’s Angels-inspired romantic suspense, high in banter and sexy times, low in detail on how, exactly, things got done, launched in September. The first book, Pros & Cons of Vengeancewas co-written with author May Archer and released in September. Book 2, Pros & Cons of Lying, will be out by November. (Fingers crossed!)

Each of her books can be read as stand-alones, but they’re always best if you read them all!

Check out our GIVEAWAY...

The Dirty Dozen hopes you have enjoyed their answers. As for me, Wade, I hope you have hopped to each and every author's blog and read about the authors who will appear at GayRomLit this year in Virginia.

Thanks for stopping by! 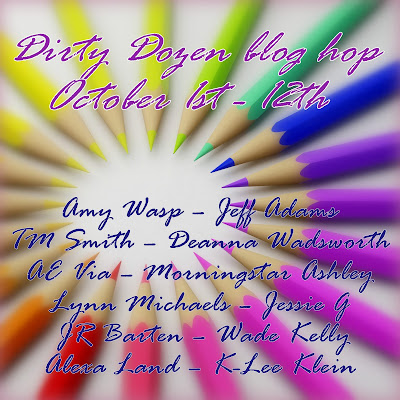